Sunset Tour Will Thrill The Little Ones 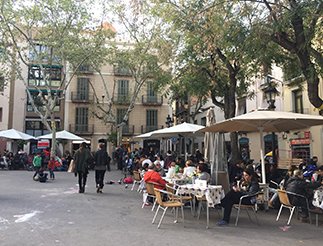 If you’re traveling in Spain, you’ll be pleasantly surprised by how affordable it is. However, in my time living here, I’ve acquired a lot of great tricks to make this already affordable, wonderful place that much more affordable. This is the first of a multi-part series on saving money while traveling–so check out the other pieces as they come out!

Anyone living in Spain knows that you should never eat a full meal on the plaza.

In order for restaurants to get those prime spots on plazas, they have to pay a hefty fee, and they pass that cost on to the customer. Sometimes you’ll even see restaurants charging an extra euro or more for the privilege of eating out on the plaza (or “terrace”)–ensuring that they’re making the most money from people occupying the most expensive table.

If you want to sit at one of those outdoor tables and drink in the scenery and street life you’ll see on a Spanish plaza, by all means, do it! But just know you’re going to get a much better price for better food from that restaurant right around the corner, or down the alley, or literally anywhere else off the plaza.

2) Go out for lunch–eat in for dinner

On weekdays in Spain, just about every restaurant you’ll find offers what they call a Menu del Día during the lunch hour (typically 1 – 3 pm). These are at minimum three course, prix fixe menus with a drink included for shockingly low costs. Menus will generally run between 10€ and 14€, with some places offering them for as little as 8€!

The most typical menu will give you three or four options for each course. And they’re all likely to be a similar portion to what you might normally order at lunch for a main. If you’re far enough away from the tourist zones, you’re also likely to get a full bottle of house wine with your 10€ menu for no extra cost. So be prepared to drink and eat a lot.

The prices go up a good deal during the dinner hour, and most places only offer the menus for lunch. So if your object is to save money, binge on menus in the afternoons and maybe get a light snack back at the hotel for dinner. You probably won’t want much more than that anyway.

Lindsay Patterson and Marshall Escamilla moved to Barcelona in the summer of 2017 with their 4 year old son, Emmett. From their home base in the charming neighborhood of Gracia, they create Tumble, a popular science podcast for kids, explore the world and write about it in Tumble Travels. Lindsay is a journalist, Marshall is a musician and educator, and Emmett is a vehicle enthusiast. Follow along with their adventures in traveling, science, and life abroad at @tumblepodcast on Instagram.