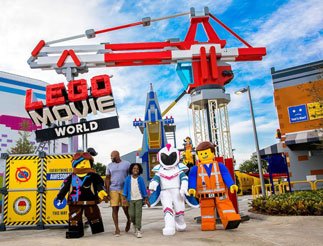 It’s already one of the most popular family attractions in the state, but LEGOLAND® California Resort is set to get even better with the opening of a new land based on THE LEGO® MOVIE™ in 2020.

Scheduled to open in the US spring, it will include rides such as THE LEGO® MOVIE™ MASTERS OF FLIGHT, which will be the biggest attraction in the new land. Join Master Builders on a Triple Decker Flying Couch as cutting-edge technology transports you all over THE LEGO® MOVIE™ universe. Surrounded by a full-dome virtual screen, you’ll feel like you’re flying through a world created completely from LEGO® bricks.

LEGOLAND California Resort has more than 60 rides, shows and attractions. You can join the crew on the LEGO® CITY: Deep Sea Adventure submarine ride to discover real sea creatures and LEGO treasures, train like a ninja at NINJAGO® World, and enter the world of knights and princesses to conquer the Dragon Coaster.

Get a driver’s licence in Fun Town, and marvel at cities built entirely out of millions of LEGO bricks in Miniland USA. The resort is also home to LEGOLAND Water Park and SEA LIFE® aquarium, as well as the amazing LEGOLAND Hotel and LEGOLAND Castle Hotel just steps away from the park entrance and filled with interactive play areas, LEGO-themed rooms, and nightly entertainment.

LEGOLAND California is open daily during US spring break, summer and select holiday periods. It is closed on Tuesdays and Wednesdays during select periods. For dates, times and resort information download the LEGOLAND app.

Oaks Hotels, Resorts & Suites offer a ‘home away from home’ for guests required to self-isolate for 14-days due to the current COVID-19 pandemic.

Let YHA spoil you with a 3-Night Accommodation Package for only $93 pn!