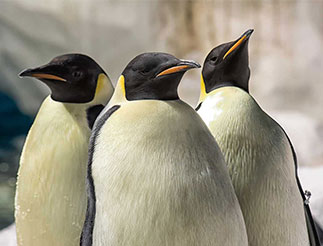 Pint-sized animal lovers will love taking a day trip to San Diego to see killer whales, dolphins, turtles and other marine animals at SeaWorld California. Located at Mission Bay, just minutes from the train station, the 77ha park offers shows, up-close animal encounters, attractions and rides. It also employs a wildlife team that is available 24 hours a day to rescue and care for marine animals.

SeaWorld is home to 10 killer whales that can be seen through large underwater viewing panels, and during daily presentations. Orca Encounter is a live documentary-style presentation helping park guests gain a deeper appreciation and respect for the creatures, and preserve their future.

The theme parks’s newest attraction is Tidal Twister – the world’s first horizontal, infinity-loop coaster. The coaster accelerates to 48km per hour as riders twist and bank like they are riding the tide along a figure-eight track that includes dynamic Zero-G roll. Among other thrill rides at SeaWorld are Electric Eel, San Diego’s tallest and fastest coaster; and Manta, a two-part attraction featuring a double-launch coaster boasting a 16m drop and lots of twists and turns.

Turtle Reef explores the life cycle, characteristics and preservation of sea turtles. It includes a one million litre plus aquarium that’s home to dozens of sea turtles; a motion-activated video game; a touch-screen map that allows guests to track sea turtles in the wild; and an exhilarating ride called Riptide Rescue.

Guests can also spin, splash and swirl around a tropical island at Shipwreck Rapids, and venture through a tunnel surrounded by nearly a dozen shark species in the Shark Encounter. Other park highlights include Dolphin Point, where guests interact with bottlenose dolphins; and the Penguin Encounter, which is home to more than 400 penguins representing six Antarctic and sub-Antarctic species.

SeaWorld California’s Penguin Encounter is the only facility in the western hemisphere where guests can see emperor penguins, which are the largest species, weighing as much as 40kg and reaching as tall as one metre.

SEAWORLD TO THE RESCUE

While visitors are enjoying all the animal shows, exhibits and education programs that have made SeaWorld famous around the globe, behind the scenes there is a mission to care for the environment and the animals that extends beyond the park’s borders. SeaWorld animal experts care for thousands of animals every day and are on call to rescue marine animals in need along the San Diego coastline. SeaWorld California alone has rescued more than 20,000 animals, including sea lions, seals, dolphins, whales, turtles and birds. The goal of the program is to rescue, rehabilitate and return animals to the wild, giving them a second chance at life.

Fabulous and FREE activities to do with kids these school holidays